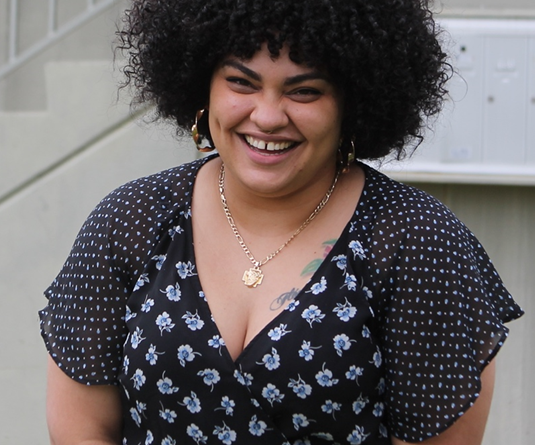 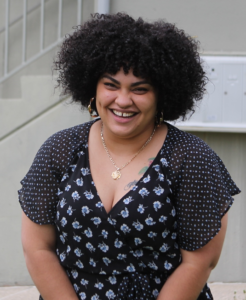 AGONZA is a Latina Activist Artist and Providence native who, as a child, was in and out of the DCYF system. She spent eight of her teenage years living in the Dominican Republic where there only were dirt streets, farms and happy people living in small rusty houses of corrugated metal. Since becoming a muralist, her work has been featured at shows in New York, Massachusetts, and Rhode Island, and she won two consecutive People’s Choice Awards at the Salem Mural Slam in 2017 and 2018. In 2021, she completed two exterior wall murals, side by side, at the Providence Housing Authority, Hartford Park campus.

In 2020, AGONZA centered herself in the BLM movement, creating focused public art which demonstrated her solidarity with communities facing police brutality.

AGONZA has been a social worker since 2014. She spends her nights and weekends creating murals around the city to create conversation on topics of concern and utilizes her knowledge as a social worker and her personal life to connect with her community. AGONZA has served as a board member for the Avenue Concept since 2019. Follow her @AGONZAART.

My name is AGONZA and I am a local Providence artist. I grew up in Providence’s Olneyville neighborhood and take great pride in my city. When I came across this project with Lilian Feinstein Senior Center, I was excited for the chance to work on a site so close to my home. During the past few years, I have better realized the beauty of those who live on and near Chalkstone Avenue and I want to be able to make an inspirational impact on my community. When selected as the artist for this mural project, the Senior Center asked me to create something based in “community.” From there, I met the seniors who attend the Center, and based on these perspectives, I was able to come up with some final designs.

My final design depicts three senior residents, representing three distinct cultures, in front of a cluster (or roost) of butterflies. The roosts of butterflies represent unity, integration, and evolution. I want the community to be inspired to start creating a stronger PVD community environment where we can all be able to evolve with one another. Finally, on the top left of the image, it will say PVD United/Unidos. I believe this will help our community take pride in where we live and the bonds we have created together.

To see the original call for art, click here.