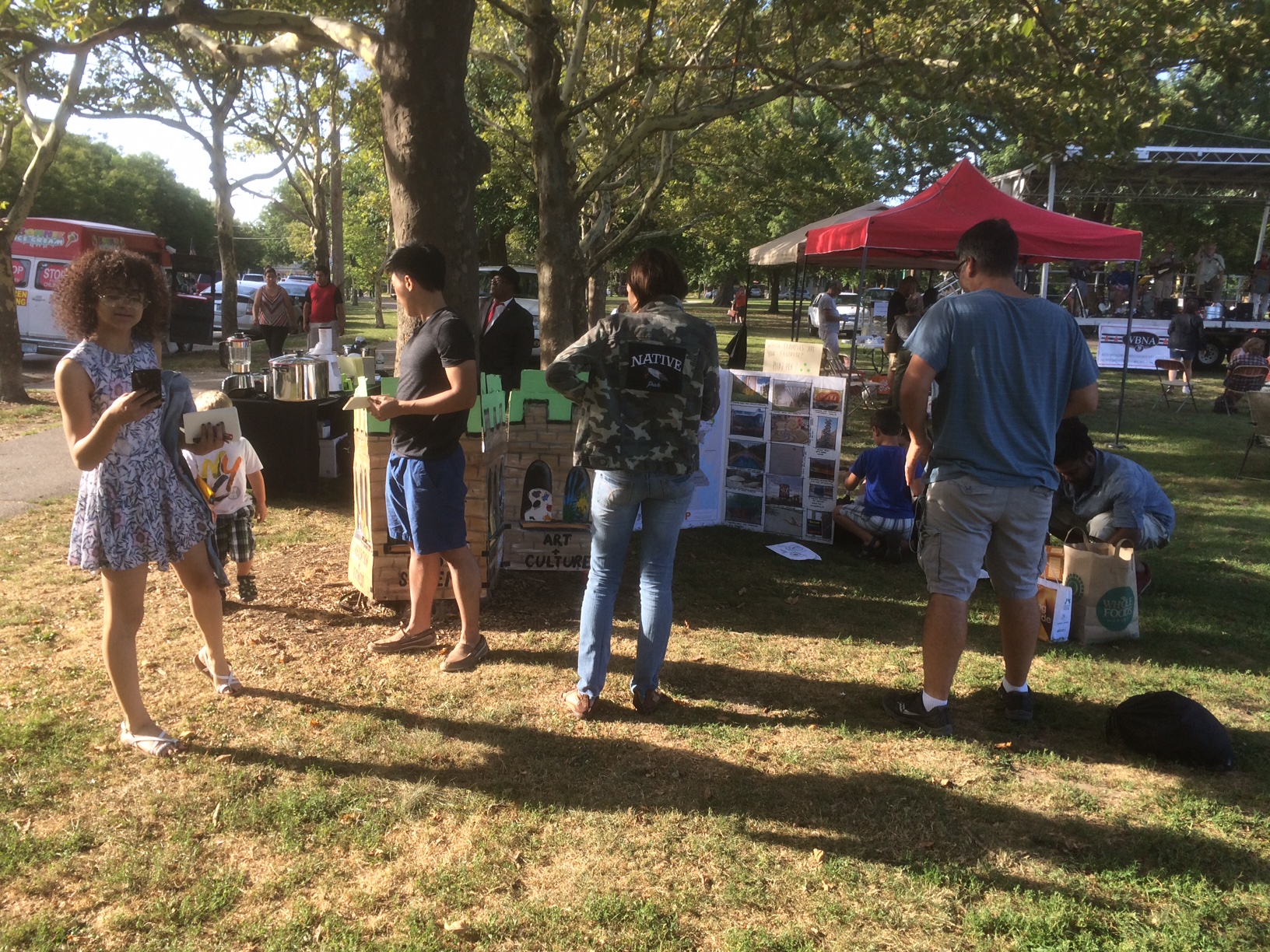 They lock eyes from opposite sides of the room. Hurriedly, Romeo and Juliet stride to center stage, meeting in secret without their respective families’ knowledge – or approval. They kiss, wrapping themselves with each other, slowly descending to the floor. “Ew,” a tiny voice protests. The basement of 40 or so people bursts out into laughter. Romeo and Juliet peer up from their slumber to catch a glimpse of the frowning, appalled child in the crowd.We’re crammed in the basement of the South Providence Library, where RI Latino Arts and Trinity Repertory Company are putting on a bilingual production of Romeo and Juliet. The performance is a part of an annual summer-long arts series called the Neighborhood Performing Arts Initiative(NPAI). Under this initiative, community groups in Providence receive grant funding from the City of Providence’s Department of Arts, Culture, and Tourism (Dept. of AC+T) to provide accessible, enriching arts performances in community spaces all across the city.

As the Dept. of AC+T’s summer intern, one of my main responsibilities is to attend these performances and provide support for the community organizations that facilitate them. As my summer internship progressed, I was astounded how each community organization could creatively re-imagine Providence’s public spaces. On one hot Saturday afternoon, I stroll along a long, cement bike trail that ran alongside the Woonasquatucket River. The trail leads me to an open field of grass, dotted with some large boulders, blue park benches, and a stage painted red. I make it to Riverside Park, where Councilwoman Sabina Matos is holding a barbecue and movie screening. Councilwoman Matos is accompanied by one of my supervisors, Lizzie, and several other volunteers. We set up a couple of tables, fill a cooler with water bottles and juice bottles, and rev up the popcorn machine. Lizzie and her husband begin boiling some hotdogs as I set out buns, ketchup and mustard. I hear a loud whirring sound and notice a screen slowly being inflated on the stage. The sky grows dark, and a projector shines the bright image of the movie Moana onto the screen. Children and their parents flock from their homes and the nearby playground, wrapping themselves in blankets and sitting down on the grass. I put on plastic gloves, and begin handing out free hot dogs. The speakers blare, and the movie begins. An open field populated by a few rocks, a few benches and a stage transformed into a space in which the local community could gather, eat alongside each other, and enjoy a movie under the stars. Of course, planning events in the outdoors is not without its difficulties. I remember one Thursday evening, I found myself at Dexter Park, watching the sky with tentativeness. The bright yellow walls of the Cranston Street Armory stood in contrast with the grey sky behind it. I checked the weather app on my phone: 50% chance of rain. However, not a drop yet.

Today, like every Thursday of this summer, FarmFreshRI is holding a farmer’s market. Small tents populate the field next to the armory under which you can find a trove of local Rhode Island produce like veggies, fruits, meats, bread, and even beer. Feeling a little hungry, I approach one of the food trucks parked along Parade street. As I wait for the burrito I ordered, I hear a child exclaim, “What’s
that!?” Turning around, I see a group of large blue carts with the label “Imagination Playground” printed on them. A couple of folks lug the carts onto the grass, and begin tossing their contents out onto the floor: a wide array of blue foam noodles, cubes, cylinders and more. “We can build with that!” another child yells. Stacking the foam shapes on top of each other, the kids begin building their own fort. With my burrito now in hand, I wait for the rest of the festivities to start. Today, the West Broadway Neighborhood Association (WBNA) is hosting a set of musical performances to accompany the farmer’s market. To provide the musicians with a space to perform, the Providence Department of Parks has set up a large stage in the park. Taking the stage first is a musician from Mary Ann Hall’s Music for Children. She starts to sing and then… a sudden downpour. Rain drenches the park. I let out a little yell and cluster under a tent along with many of other parkgoers. Nibbling on my now wet burrito, I see some kids taking refuge in their newly built fort. Some had tipped over the blue carts onto their sides, and crawled inside for a hideaway from the storm. “I’ve got a good song for the rain, hopefully it’ll work,” the singer says. She starts to wave over some of the kids. “Come round over here!,” she says, beginning to play her music again. Some of the younger audience members and their family go onto the stage too, dancing along to the music. Despite the wind and rain, the performers and the audience members found creative ways to let the fun and celebration go on. This has been my internship experience. I’ve been welcomed, as a Brown University student and a boy all the way from Sacramento, California, to Providence’s community spaces. And in each of these communities, I met people who shared with me their joys, their positivity, and their means of expressing themselves, all in the name of celebrating Providence.

Kevin Do is a Brown senior in Anthropology who interned with the City of Providence’s Department of Arts, Culture + Tourism this summer through the Impact Providence program.