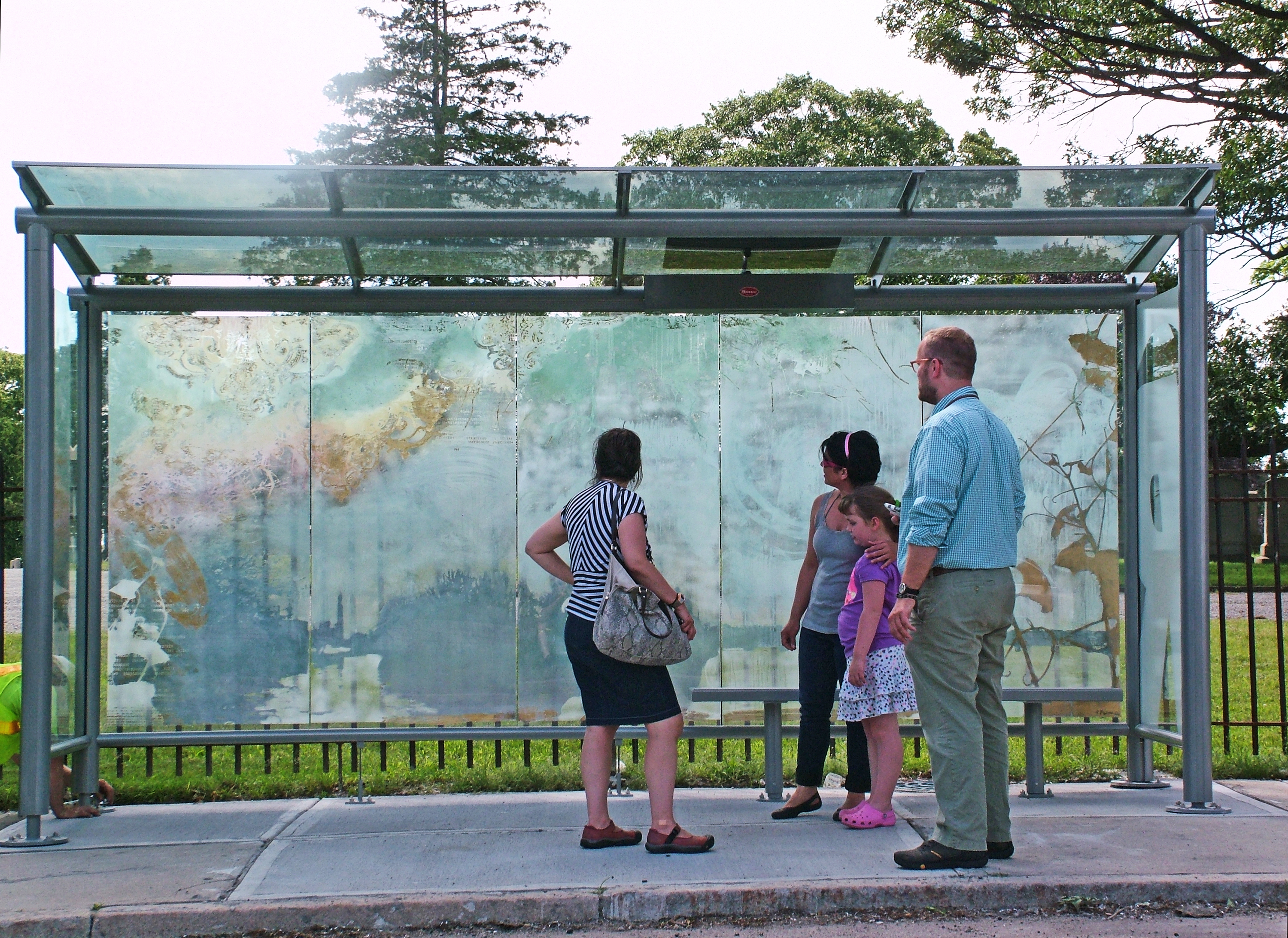 In June 2014, the Rhode Island Public Transit Authority launched the R-Line, the state’s first rapid bus route. But if you’ve taken an R-line bus, you’ve probably noticed more than just the speed. Colorful bus shelters, freestanding art screens, and creative seating elements line the route’s North Main Street and Broad Street corridors. Read on for reflections from the artists behind the City of Providence’s Art in Transit partnership with RIPTA.

By Lu Heintz in collaboration with The Steel Yard, located at Montgomery Street Inbound

“Food can help to sustain a community’s culture; perhaps this piece will help to link a fruit readily available in Broad Street markets to memories of the tree itself.” – Lu Heintz

By Anna Snyder and Timothy Ferland in collaboration with The Steel Yard, located at Rogers Williams Park Outbound

“Just one piece of public art revitalizes a whole street. I think it’s the first way in to a neighborhood, especially a troubled neighborhood. It makes people look out their window or walk down the street and feel proud. And then there’s this one nice thing on the street and then there’s garbage on the street so you start picking up garbage. I’ve seen it happen, people just start taking care. And then people come from two streets over to look and you start having foot traffic and you start having community. Making that investment, and then making it multiple times along this rapid transit line, it’s like opening the gates to improvement.” – Anna Snyder

By Lee Charlie Corley in collaboration with The Steel Yard, located at Thurbers Avenue Inbound

“I’ve done public art before; I’ve made lots of design-rich bike racks and benches and hand rails, trash cans and planters. I really do like for people to be able to see my work and feel like their neighborhood is being appreciated. So people will be like ‘Oh my god, they put a bike rack in. But they didn’t have to make it look like a carrot! That’s awesome!’ Which is what I feel like when I see public art. ‘Oh, wow, that’s so special that they did that for our neighborhood.’” – Lee Charlie Corley

By Kim Yasuda and Adam Bush, located at Public Street Inbound and Outbound

“A synagogue is really just a gathering place, that’s all it means. It’s only an American Jewish practice that synagogues become these kinds of churchlike spaces. So how can we think about a synagogue as a gathering place, and think about a bus stop in the same way, with the same vocabulary. The shelter and the synagogue sort of have the same mission, it’s about creating these new spaces of interaction that bring people together instead of keeping them apart.” – Adam Bush

Artwork by AS220 Youth and students from the Rhode Island Training School and the Urban Collaborative Accelerated Program, design by Scott Lapham, Miguel Rosario, Nick Carter, and John Bhogal, fabrication by The Steel Yard, located at Trinity Square Inbound and Outbound 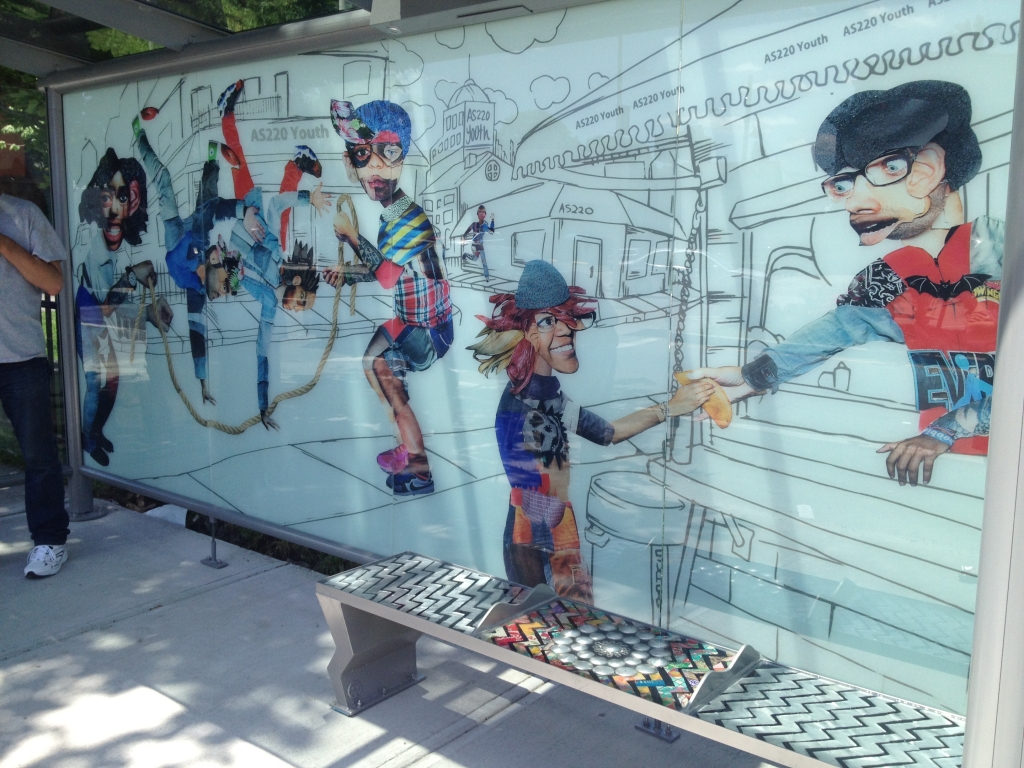 “Art like this can inspire people. It gives people ideas to make even more bigger artwork. Why stop now? Keep going on and expanding and making more ideas. It makes me want to be part of another project. Also, this program [AS220 Youth] has been good for a long time, and just the fact that the art is by us and people know that, people spread the word. This is a small state, and it’s a small city, and when it comes to stuff like this it’s a big change for a lot of people. It makes our city look great, brings some positive change for everybody to share.” – Edwin Pastor, AS220 Youth member

By Howie Sneider in collaboration with The Steel Yard, located at Roger Williams National Memorial Inbound

“I was really excited about doing something with these really old pieces of wood and thinking about how this wood we’re using was part of a building that was built in the industrial era from a tree that was planted in the colonial era. It became this very long timeline in my brain. I hope that people connect to the age and the solidness of the bench. That they sit there and they feel grounded and safe and secure. I designed them to really reference the historic old oversized rough cut furnishings so that people would hopefully sit and think a little bit about the history and stop to question almost whether those benches had been there for the last two hundred years.” – Howie Sneider

“I learned a lot about the brutality of the riots that destroyed the neighborhoods of Hardscrabble and Snowtown. White rioters literally took hooks and pulled down peoples’ homes. I want to draw peoples’ attention to that in a way that encourages them to do some analysis in the hopes of overcoming or understanding racism in the present day. Housing is an issue that is still very active; race has a big impact on the way neighborhoods are created. These are still live issues so I hope people draw that connection.” – Erik Ruin

Remember me as you pass by…

“I’m hoping that someone will be sitting on the bench in the shelter and they’ll be bored of their iPhone or their tablet and they’ll just take a look to their right. And they’ll see these portraits of these people and they’ll look below them and see all this text, in nice big letters. And maybe looking through that, see all the gravestones, and maybe wonder about who’s in the cemetery, and who these people are in the portraits and maybe read a little bit about them and maybe get curious.” – Gage Prentiss 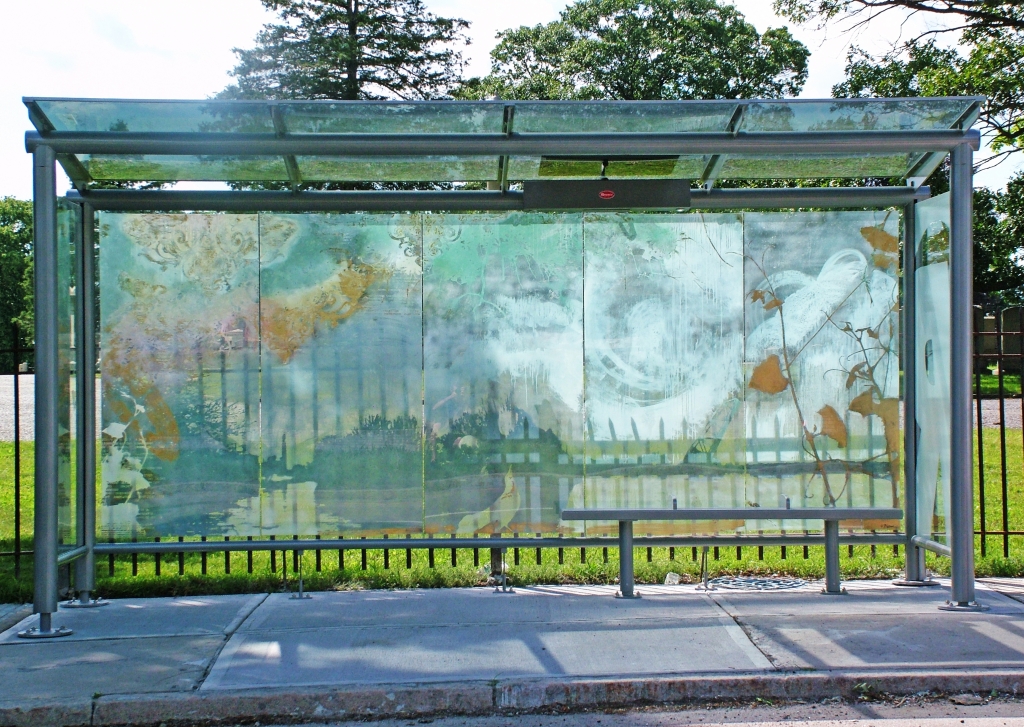 “Typically public art is very loud and brash. I love that stuff, but I feel like there isn’t enough of a place for more subtle work that people can kind of notice slowly, be like “oh, oh my gosh, there’s a bridge right there,” or “oh, I never even noticed there was a chandelier in this tree.” It doesn’t whack you in the face; you kind of live with it for a while before you notice it. And I like the idea of a bus shelter. I like the audience member who they didn’t even know that they were about to experience something that’s political or transcendent.” – Tracy Silva Barbosa 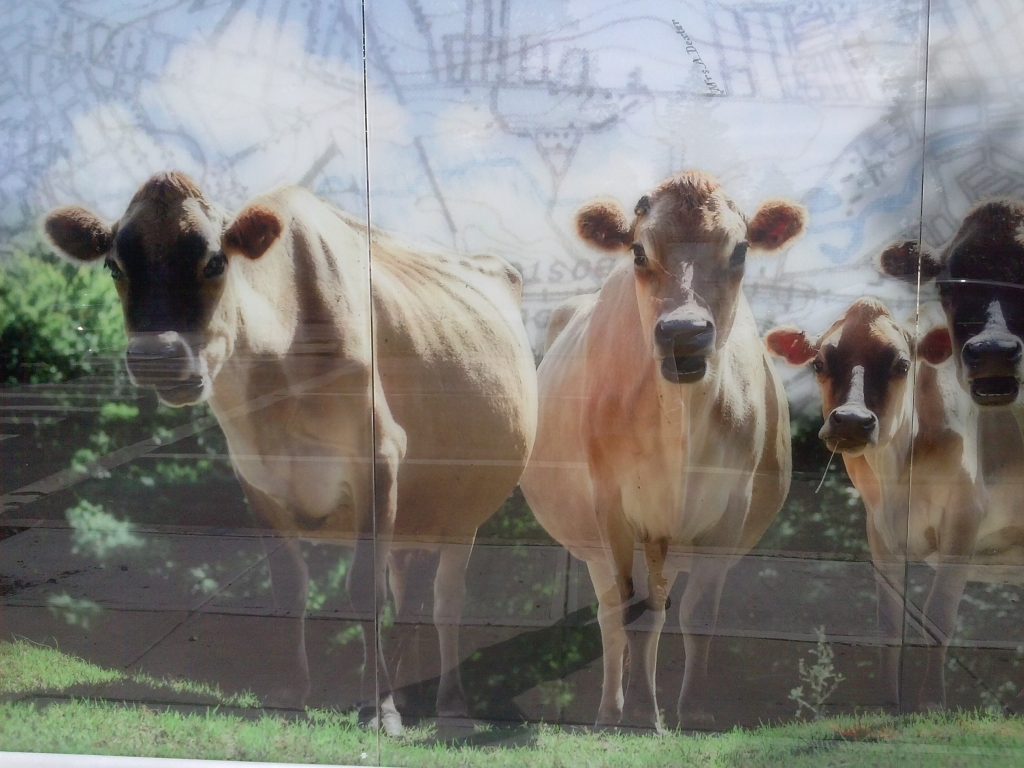 Our image gives passersby a glimpse into what used to be here, and what still exists surprisingly nearby. – Erik Carlson and Erik Gould 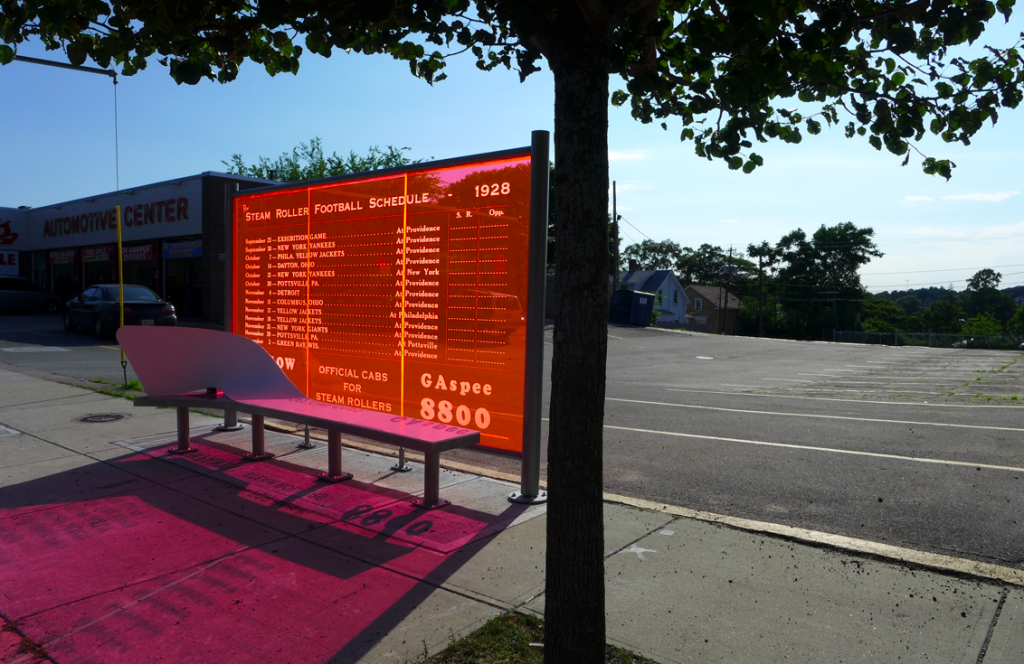 “I chose the subject matter because I thought it was accessible. A lot of people like sports and I thought that was a really interesting way to access maybe people who don’t generally go to art museums. It’s nice for people to realize that there was an NFL team here. And it’s not art with a capital A. There’s a use assigned to it.” – Michael Oliver Null 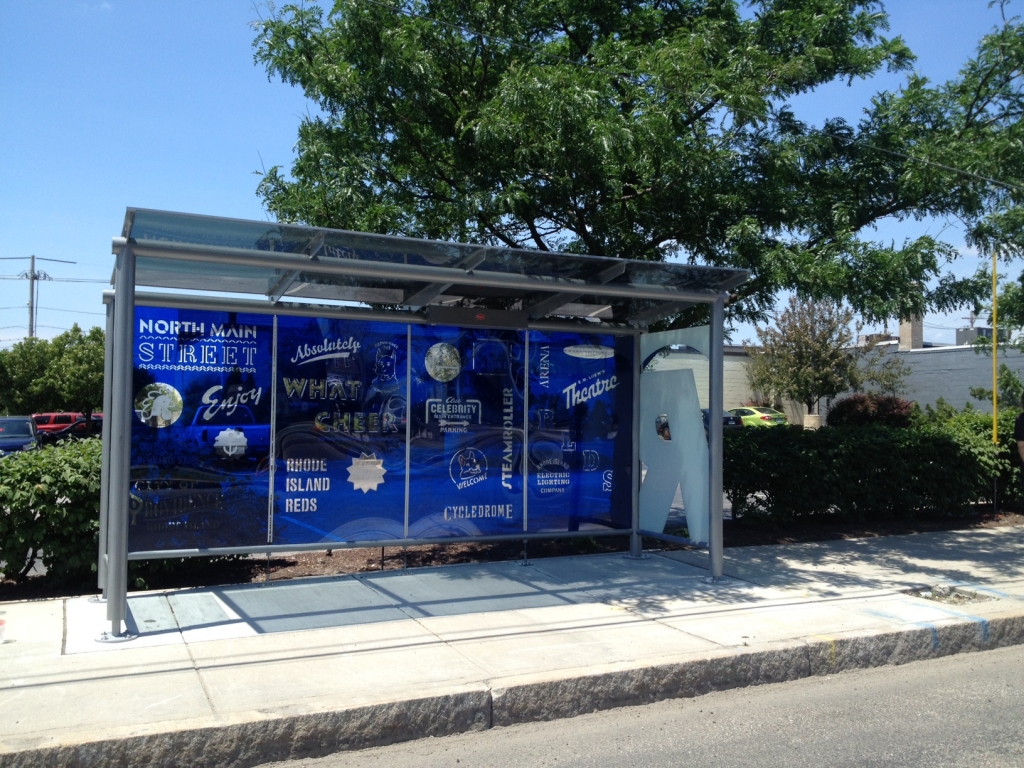 “Art for me is the technique that I’m using to think about equity and access to public space. So for me, it’s very socially driven. It’s very politically driven. I’m curious about the way that art can talk about public issues while in public space. I hope for people who have lived in Providence or around North Main for a really long time to see these logos and to share stories about these venues. Through that, I hope it sparks community, sparks conversation, sparks sharing of pride, maybe.” – Jennifer Dalton Vincent