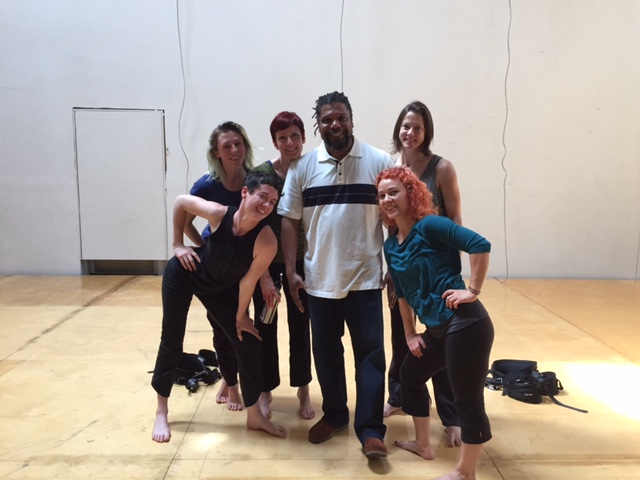 Martha Graham is quoted as saying “wherever a dancer steps is sacred ground.”

When Bandaloop first came to Providence about five years ago, I was bartending at WaterFire for a local catering company. As I was in route to my station, I looked up and there they were, tumbling and sailing across downcity buildings, suspending belief on the ground and their bodies in the air. All I could say to myself was “cool.” I was on my way to work after all.

Sometime in 2016 I was called to a meeting with PVDFest presenter FirstWorks, The department of Art, Culture + Tourism, and Thomas Cavanaugh of Bandaloop. He showed a video entitled “Public Canvas” and spoke about how Bandaloop had integrated with local artists of the Bay Area and worked with different organizations in the community as well as the pervading tech gentry new to the area, to create a platform for both sides to have voice amplified through the vertical church that Bandaloop creates. The video, a ballet of flash and bang seemed to sing through the moment, as if suspending belief is ritual for Bandaloop. And then there was the five seconds where I saw myself in the air with the dancers. Ben, a Bay Area poet, ambling down the side of a building, reciting a poem, with what looked like my ease of motion, performing while walking through a crowd. If the proposal on the table was Providence having a Bandaloop Public Canvas then I had to play Ben’s role.

Fast forward and I’m in Oakland. This convergence is the result of a conference call exploring ideas of what “Providence Public Canvas” would look like. I got to the the meeting place about thirty minutes early and made the decision to let go of any expectation ofhaving creative control. Instead I would focus on collaboration. This is not my field of expertise. Let me be honest, “plays well with others and shares toys at recess” is not listed as a strong point on my resume. But here I found that an opportunity for growth in both my personal development and artistry. I was meeting with Amelia Rudolph, founder and artistic director of Bandaloop. This would be our first face to face, and from what I gathered from our conference call, she is a woman with vision, capable of connecting dots quickly. If I kept my mouth shut long enough, I just may learn something.

From the beginning we are business. I tell her it’s important that she comes and answers for the Providence community: “why Bandaloop?”  at the May 10th Community Flavors event we are planning. She lays out the performance schematic and timeline in which we have to work. In essence, our feeling each other out was actually hashing out work, drawing us closer to a shared vision for Providence Public Canvas.

Next, Thomas Cavanaugh shows me the “The Great Wall”and tells me of the relationships he has helped build in the Bay Area through the ensemble’s work. Suddenly we are in the studio and I am meeting the dancers, who are busy warming up and preparing to practice. Amelia explains the work load. I’m noticing a pattern: everything is a,b,c. In the same manner she laid out the schematic to me of what the show was to look like, Amelia religiously laid out what routines were to be practiced and in what order. “LA, Dallas, Providence,” she says. I’m thinking she has found one method, one way of doing things that can be applied to most aspects of conduct and it works. I could benefit from finding one way to deal with various aspects of my business.

Since I volunteered for this project, people have been asking me if I’m afraid of heights. My reply has been, “I find that if I am afraid of something or have some fear, I must confront it.”

After the dancers fly and twirl, solo and move as quartets, it’s time for me to get up on the practice wall. First, i go low, to get used to the harness, the shifting of weight while walking, and leveling my body to be parallel to the ground. Easy enough. Next I’m high up. Since I volunteered for this project, people have been asking me if I’m afraid of heights. My reply has been, “I find that if I am afraid of something or have some fear, I must confront it.” And in that statement somewhere is an admission masked by heroic stupidity. In order to graduate basic training in the army, one must learn to throw grenades. While in line, the sergeants speak calmly, assure you of safety, tell you there is nothing to worry about during instructions on how to handle the weapon. But once they put the grenades in your hands, they become like Samuel Jackson (pick a movie) threatening to blow a hole in you. They scream fear into your stillness until you reach the point of releasing nothing but adrenaline behind the two pound metal ball of kaboom. Suiting up in the harness, walking up the latter to its highest step, and being told walk off unto the wall reminded me of the fear screamed stillness. And just like that I was 30 feet in the air, parallel to the ground and hanging on to every instruction Amelia gave me. As I stepped down the wall, any anxiety dissipated with me inching closer to the ground. When it over the room applauded, as if I was crossed over into a secret society sacred air benders  very few are able to join. I went back up twice more, and Amelia gave the nod that me doing this in Providence was more than possible.

If what Martha Graham said is true, from my experience, I must say the air in Providence will once again be blessedand divine.